Glosten’s project aiding the dredge Oregon repower has the distinction of being Jeff Rider’s first day at Glosten, Ira Stevenson’s source of desk art, Morgan Fanberg’s first attempt at dredging, and Bob Van Slyke’s excuse for clean new pants. Besides being a memorable experience for many of our engineers, this project also demonstrates some of Glosten’s innovative problem-solving abilities. Read on to learn more about the success of this almost-five-year project that has recently wrapped up.

The cutter suction dredge (CSD) Oregon operates on the Columbia River all day every day through the summer and fall, maintaining the depth of the river for 100 miles to ensure cargo ships can reach the Port of Portland, Oregon. Designed by the Army in the 1940s, it was originally a steam-powered river tug, but was converted to a diesel dredge in 1965. Dredging operations require an enormous crew to manage the dredging itself (no small feat with an over-40-year-old engine) as well as the management of the 10,000-foot material removal pipeline (see photo below). 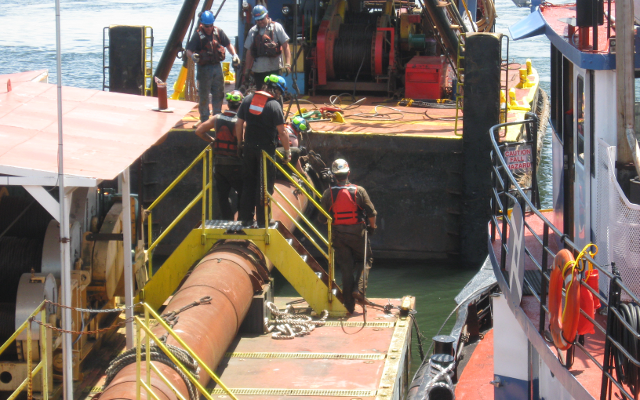 Around 2010, the Port of Portland realized that the ancient dredge machinery was the largest polluter on the river. They decided to replace the pump engine and generators to improve the environmental impacts of the dredging operations. Glosten’s Bob Van Slyke had been doing work for the Port since the early 90s. His POP experience ranged from an initial conversion of a salvaged Liberty ship into a floating dock, to his most recent project–a ramp barge for moving the dredge’s equipment. The Port selected us to develop the detail design for the dredge repower and refit, and we like to think that was due to our excellent established working partnership.

In order to select a new engine to power the dredge pump, Glosten staff had to learn the gritty details of suction dredging – it’s not an ordinary engine that can create a vacuum and allow a slurry of water and riverbottom material to be moved through a pump. We dove in and developed significant dredging expertise through this process – utilizing classes, dredging books and a connection with one of the nation’s premier dredging experts. Our extremely capable team was up for the technical challenge, but it wasn’t the only challenge facing the project.

We also needed to gain the trust of the vessel’s crew before we could engineer a successful repower.  People are naturally averse to change.  The dredge crew were experts in their admittedly outdated vessel, and knew the best ways to make it perform its duties.  Moreover, the vessel had served the Port well for generations.  Even the young guys on board seemed to feel that what was good enough for their grandfathers was good enough for them. We recognized that the crew’s perspective would be critical to helping us ensure that the repowered vessel could continue serving the Port for many more generations.  So we put extra effort into spending time with the crew, listening to their likes and dislikes and getting feedback on our design process to ensure everyone would be satisfied with the results. 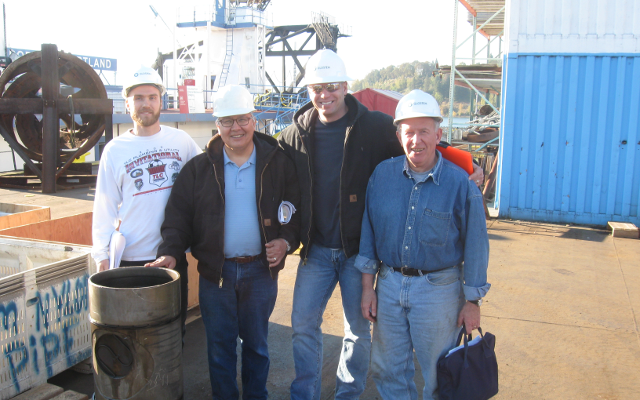 Glosten had a particularly successful innovation early in this project when we realized that the vessel had no as-built drawings to help us keep track of vessel arrangements. Bob had seen laser scanners used in the oil and gas industry to make models of rig interiors. It made sense to do this for machinery spaces of ships too, so we hired a scanning company and ended up saving ourselves (and the client) hundreds of hours of shipcheck time. Since this project, Glosten has acquired in-house laser scanning expertise and equipment which we regularly employ to improve project efficiency.

The dredge repower proved itself to be no ordinary PS&E project. The Port needed to replace large amounts of their vessel’s equipment, but wanted to do so without disrupting the dredging schedule. To achieve this feat, we designed two separate shipyard packages complete with modification drawings, construction specifications, and equipment purchase specifications, corresponding to two separate shipyard periods. The replacements had to be cleanly divided so that the dredge could be put back together halfway through the repower – not unlike pausing a surgery partway through – and go back to dredging for the year, then resume replacements again the next winter. The first package was made up of all the electrical modifications:

The second shipyard period required last minute package updates to coordinate with changes made during the first year’s replacements. It included the mechanical aspects of the repower:

After over four years of teamwork, the Port of Portland got exactly what they were hoping for: the dredge has reduced its emissions levels, and can now pump more dredge spoils further using less fuel. Though they must still pause for vessel maintenance (after all, it’s a 70-year-old boat!) the dredge’s capabilities are much improved.

• 23% reduction in dredge fuel consumption (gallons of fuel per day) reducing fuel costs and the number of required fuel deliveries.

• 33% increase in dredge fuel efficiency (cubic yards of spoils per gallon of fuel).